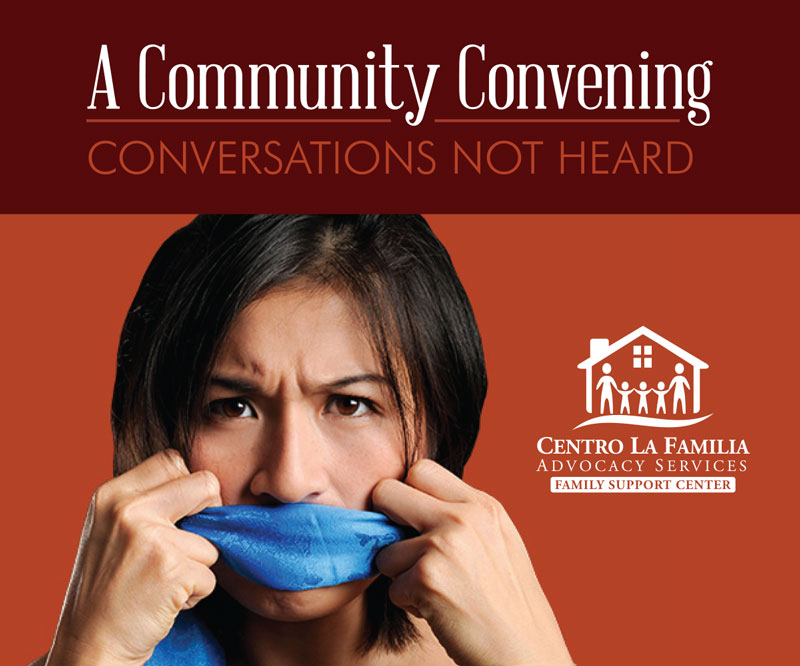 Experts, speakers and a survivor of modern-day slavery will gather Jan. 15 to raise awareness and explore the issues of domestic violence and human trafficking at “A Community Convening: Conversations Not Heard.”

Hosted by Centro La Familia Advocacy Services (CLFA), the event brings together a broad range of advocates and professionals to discuss the topics from cultural and legal perspectives. CLFA hopes to improve public awareness so that the victims of domestic violence and human trafficking can be better identified, served and supported.

“Raising awareness is critical to the public in general,” said Margarita Rocha, executive director of Centro La Familia Advocacy Services. “Often, the perception is that domestic violence and human trafficking are taking place somewhere else. But this happens in our community.

“Education is the key to reaching and providing services to the victims of these crimes, and we want them to know that services are available and people are ready to help.”

The keynote speaker is Maria Suarez, a human trafficking survivor and founder of The Maria Suarez Foundation. Suarez will talk about her personal experiences, her accomplishments and the foundation that works to prevent child trafficking by educating and empowering today’s youth.

“I want to make people understand what’s really going on,” she said. “People think human trafficking only happens to people who can’t read, to people who are poor, or to people of a certain race. That’s not true. Traffickers don’t look at whether you’re rich or poor, young or old — they look at what they need.”

Suarez, then a recent immigrant from Mexico, was just 15 when she was kidnapped off a Los Angeles street and sold into captivity. She spent five years in slavery before her captor was killed by another man.

Suarez was swept up in the crime, convicted in connection with the murder and sentenced to 25 years to life in prison. She spent more than 20 years in prison before being freed in 2004.

The program also features speakers who will explore different aspects of domestic violence and human trafficking. Speakers include:

State and federal prosecutors will speak about “The Law at Work: Prosecuting the Abusers.” They are:

Additionally, most of the day’s speakers will gather as a panel to discuss “Conversations Not Heard: A View from the Front Lines.” The panel will include Suarez, Rocha, Thao-Urabe, Clinton, Giacomazzi, Frye and Mario Gonzalez, manager of the Crime Victims Assistance Program for CLFA.

The event is funded and supported by the County of Fresno Department of Social Services. For more information or to register contact Centro La Familia Advocacy Services at (559) 621-6208.

Centro La Familia Advocacy Services is a community-based, non-profit organization serving low-income families throughout Fresno County. The organization was founded in 1972 to provide direct advocacy and intervention services for those needing help. Its mission is to empower clients to access life-sustaining resources and become self-sufficient through education, training and social services. Centro La Familia Advocacy Services provides legal and other support for victims of domestic violence and human trafficking.

About domestic violence and human trafficking

Statistics show that domestic violence is the leading cause of injury to women between the ages of 15 and 44 in the United States. More women are injured by domestic violence than car accidents, muggings and rapes combined.

Human trafficking is a modern-day form of slavery and one of the world’s top criminal enterprises. In the U.S., most human trafficking occurs in California, New York and Florida. While researchers believe most victims are women and children, traffickers can prey on both men and women of any age, ethnicity or income level.